Why Mead Is Good For You & The Planet

Honey has always held a fascination for humans, and was thought by many cultures throughout history to be a gift from heaven.  Maybe it is!

Honey is the most important ingredient in mead, and it contains more than 180 different substances including vitamins, minerals, enzymes, antioxidants and sugars.  Raw honey (the only kind Mysto uses) always contains bee pollen, and bee pollen contains practically every single nutrient that we need to live.  Pound for pound, bee pollen has more protein than beef.

Known for thousands of years for their health benefits, honey and bee pollen remain somewhat of a mystery to modern science.  A full understanding of how they are made and even a complete catalogue of all of their ingredients remains elusive.

Honey is primarily  two types of sugar, but it is nothing  like white sugar, which has been reduced by processing to a single molecule of purified sucrose, making for vast differences between it and honey.  Here’s just one example: Excess white sugar consumption can lead to diabetes, while honey is being used to treat diabetes!  Honey simply does not trigger the same insulin response as white sugar.  From the The Journal of  Diabetes and Metabolic Disorders:

“There has been a renewed interest in the use of honey in the treatment of diabetes mellitus…Honey has been shown to scavenge reactive oxygen species, ameliorate oxidative stress and reduce hyperglycemia…honey ameliorates several metabolic malfunctions commonly observed in diabetes…”

Honey has always been a medicine as well as a food.  Rediscovered, it is being used by some of the world’s leading hospitals for it’s ability to defeat MRSA, especially to treat the skin after burns.   Our biochemistry is very complex, and honey is a complex natural substance that meshes beautifully with ours in many parts of the body: most notably in the lungs (honey is good for coughs and dry lung conditions) and in the digestive tract where it promotes digestive health via support of a healthy gut flora from fructo-oligosaccharides.   Honey provides energy from the sugars and micronutrients, and on the palate- happiness from its flavor.  Always search for raw honey (health food stores or local beekeepers) as it’s healing qualities are stronger and it’s taste is much better!

Numerous studies now say that science backs up what humans have known about honey for millennia.

What else is in our mead besides raw honey?  What’s left is mostly water, alcohol and the extracts of herbs, spices and fruits. 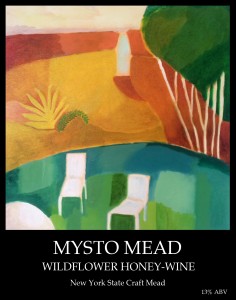 Water?  The most important ingredient for all of life.  Mysto uses mineral rich springwater from a protected watershed.

Alcohol?  Surely alcohol has no health benefits.   As it turns out, moderate consumption of alcohol correlates with a longer life span.   Alcohol is a natural product, produced by yeast as they consume sugars.  Yes, responsible drinking helps you live longer.  Maybe it’s because you are having more fun?  Again, science just can’t be sure.  Learn your limits and stick to them and alcohol will be good for you.

Herbs. Spices and fruits?  Is there anything better for you?  We are in the midst of an herbal medicine renaissance here in America for a very good reason.  Herbs promote wellness and are the origin or the inspiration for most of today’s pharmaceuticals.

In Ayurveda, the ancient, still thriving medical system of India (the Brits did try to wipe it out and failed) honey is known as ‘Yogavahi’, which means “the carrier of the healing values of the herbs to the cells and tissues”.  Honey enhances the healing qualities of plants.  Mead makers still call any mead made with herbs or spices a metheglin- the Welsh word for medicine. 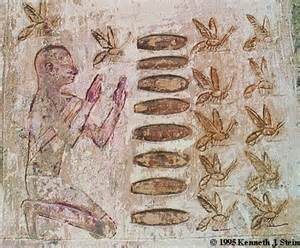 Honey Found In Egyptian Tombs Is Still Edible After 3,000 Years!

The world’s first alcoholic beverage was most likely made with honey thousands of years ago according to many anthropologists and archeologists and is now the fastest growing segment of the beverage industry.  Say hello to our old friend Mead.

We at Mysto believe that the honeybee is overdue for greater recognition as humankind’s other Best Friend.   Sure bees sting, but don’t dogs bite?  And when is the last time a dog left a treat for you as awesome as honey?  Everybody knows bees are responsible for pollinating much of our farm crops, but do they know that bees also helped create the happy hour?

Honey Was Always Believed To Have Come From Heaven

This belief made the hardworking honeybee the very messenger of God. On the island of Crete the goddess Artemis even took the shape of a bee.  Zeus, the most powerful of all the gods, was kept alive by bees who fed him honey while he was hiding from Kronos.  Dionysus was originally the god of mead according to some scholars, and at festivals in his honor the Maenads carried ivy-covered staffs flowing with honey, while the gods relaxed on Mt. Olympus eating Ambrosia and drinking Nectar, thought to be honey and mead respectively.

The list of ancient references to Mead (and honey) is long.  Mead, honey and bees figure prominently in the Hindu religion, the world’s oldest faith.  In the Norse myths Odin steals mead from the dwarves and while doing so he accidentally spills a few drops onto earth which magically gifts humans with poetry and song.  Yes what you’ve heard is true.

In parts of Europe it was sometimes common for people to tell their problems to the beehive so they would reach the ear of God that much faster. Was the beehive the first confessional, the first tabernacle, the first therapist?

Honey holds a message for us, direct from nature and brought to us by our next best friend the honeybee: Life is sweet.

Did Someone Say Green?

Beekeeping, practiced by humans for thousands of years, is still essentially the same as it ever was, using small beehives requiring almost no resources- no cutting down of forests, no fertilizers, herbicides or irrigation.  Beehives take up almost no room.  Many people keep bees in their backyard or even on their roof. More than any other food crop, honey production has a positive impact on the environment. 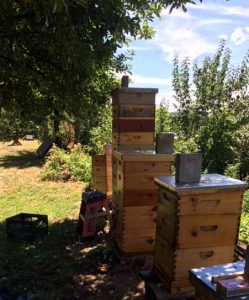 Bees stay essentially wild. Harvesting honey does not harm the bees. No fences are needed.  Since honey and alcohol are natural antibiotics, mead production does not require extreme or excessive sanitation procedures, so little water is used and there is very little waste. Mead making and mead drinking bear a light footprint on Earth.

One of the most interesting aspects of mead is it’s remarkable versatility. Traditionally flavored with herbs, spices and fruits, there is a huge variety of flavors and many different styles.  Often served sweet but delicious dry.  Often plain, with no flavoring other than perhaps some aging in oak barrels.  It can have an alcohol content as high as 19% or as low as 3 or 4 per cent and it can be carbonated like a beer or sparkling wine. It can be drunk two weeks after fermentation begins or it can be aged for years. It works well as an aperitif, as a dinner wine or an after dinner cordial or digestif, depending on how it is made.  It pairs very well with many types of food, making a fantastic dinner wine, or with ballgames televised or live, and compliments and supports any picnic-like and music playing activities.

Mead: It’s Really About The Plants

I believe there is another message the bees bring:  Our best friend has always been the plants. This truth comes to us through the flower’s nectar, foraged from waves of wildflowers that whisper on a summer day: Life is meant to be enjoyed.

For a cup of honey one million flowers are visited.  The nectar is brought back to the 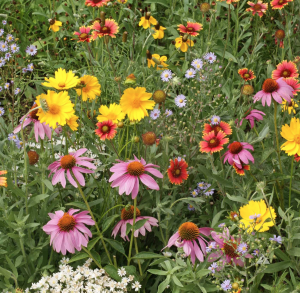 beehive tiny bit by tiny bit, and there the bees deposit it into hexagonal open wax combs. Groups of bees gather and fan their wings, thickening the nectar and giving the honey its final form. It is then sealed away under wax. So perfect a creation it can last 3,000 years.

Because of the plants we can breathe. They are the symbol of nations, cultures and continents, symbols of identity and belief, while they give protection and medicine and beauty. They bear witness to the human condition, assuage our pain and lift our spirits, calling us forward to our best selves by their graceful presence, tolerance and forgiveness. They return and return, cheating death. After the passing of the brutal regiments there grows again the wildflowers.

Native Americans say that every plant has a song that you will learn if you can be the plant’s best friend. 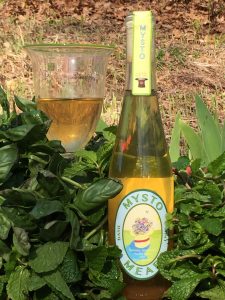 After the flower nectar is turned into honey, released from the comb and fermented by yeast, mead is born. Transformed into alcohol, the honey herbs and fruits go on a journey even further into the heart, mind and body of humankind.  Surely, as the legends relate,  mead must have rather quickly became known to encourage a singer to the song, a poet to the poem, and  for romance to call on a man and a woman.

No wonder mead was considered sacred, and has been called “the link between nature and culture”- the culture which makes us human.

So Ladies and Gentlemen, step right up.  One gateway to good health and the enjoyment of life is right this way.  Have a glass of mead.